Some may say America (and this is probably true of the moment) BUT, historically, no other nation has had an effect on the world greater than the United Kingdom, It's language links billions of people. It's laws form a basis for many nations. It once ruled over 25% of the worlds people. Like it or hate it, the British Empire, the largest formal Empire the world has ever known, will never be equalled, unless the dynamics of the world change dramatically. It is responsible for a disproportionate amount of the worlds innovations in all areas of human endeavour. It's people now inhabit the far corners of the globe.

We arrived at Manchester Airport at about 15:15 (3:15pm) and began the humiliating “border crossing” ritual. A ritual for all tribes EXCEPT those of the Schengen Area and a small number of others. We were treated nicely by the immigration, just as were those others that travelled on correct documents. An alarming number of people were removed for “questioning”.

Britain, like Australia has worked VERY hard for centuries to build a fair minded FREE people.. Neither country got a free ride. They are now a magnet for the impoverished, corrupt, war torn and those wishing to escape the “perverted” religions. Sadly many choose to bring their problems with them... We can only hope they accept the ways of the British/Australians, in the fullness of time and integrate themselves into these very forgiving societies.

Back in the land of my birth, we are taking stock of our future. We will examine in detail our finances, and our cycling options. Monday - Thursday 17th - 20th March 2008. Wigan, United Kingdom (cycles remain “boxed”)
Approx. k's Average Speed kph Cycling time Hr(s) Min Max speed kph Max temp we recorded °C

Our cycles remain boxed and we have decided to take a short break with family and friends... As yet we are undecided where to cycle. ONE THING IS AS CERTAIN AS WE CAN FORESEE, we will continue to cycle, most probably in Asia. Nothing about where, we will cycle in Asia is decided yet.

On Friday the 21st we commence a “house-sit” for 10 days or so... This will take some pressure of our SEVERLY depleted funds. There is internet here (so we are told) so we can do some planning. Catchya Later...

We are now in our “housesit” and will use this time to plan our future.... We were fortunate enough to find this young girl, aged 19 working as an “Au Pair”, her name is Ania and she is Polish. We became friends, Ania now lives in Cambridge with my (Mal's) Family.. She will attend university there, studying journalism. She has an exceptional mind – we both wish her VERY well...

We are upset by a number of happenings.. Sadly we feel we cannot cycle Africa. Our thoughts on this are varied.. IF you have an upright bike and not too much gear, you probably would average about 20kph... This additional speed will help exponentially, as will distances covered in a day... Our heavily loaded bikes average only 10kph or so and cannot accelerate out of danger... This was the worst aspect of the 20 or so attacks in MORE.... WE SIMPLY COULD NOT GET AWAY.

We thought we had finished with this, but yesterday was freezing... we awoke to this...

Lee took full advantage to make a “snowman”, the fall was significant, about 3” deep. 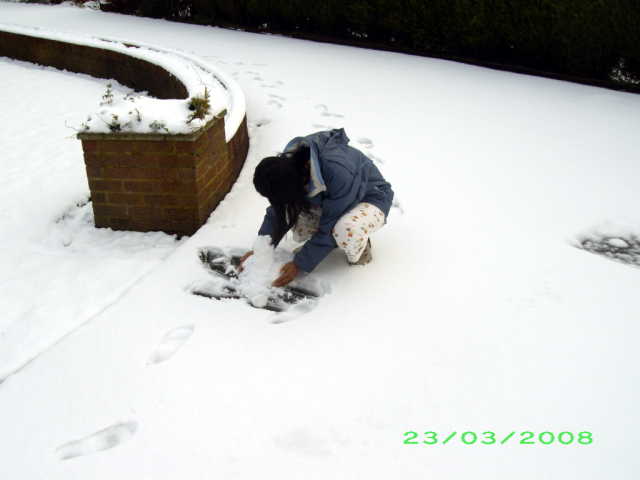 Unlikely we will get more as it is late march now :-)

A mixed month, with our cycling trip taking a major re-direction. Attacks, Visa's and borders, plus a whole host of variables make things harder than what they should be. A changed world, where xenophobia, religious hatred, terrorism, corporate greed, etc.. muddies humanities waters. Underlying all this, are incredibly warm caring human beings and WE, are privileged to have met many of them.