Back to the Home Page | Guestbook

OUR GEAR
We have chosen the “Catrike Road” (Only time will tell if we should have chosen another make) supplied by Ian Humphrey's of “Flying Furniture”. I will make one statement here. I do not want to endlessly quantify it nor give my reasons – either here or by email.
The purchase of our bikes was THE MOST unpleasant buying experience of my life – bar NONE

The question many have asked is why we did not buy here in Perth? We did look at the Greenspeed in Nicks “Bikeforce” store South Perth, he graciously allowed a test run around the Swan on his demo GT3... Lee and myself felt the GT3 was not for us The “touring model Greenspeed (Beautiful looking bike) at Five and a half thousand or so, was an awful lot of money to pay. We were also fortunate enough to meet (once) Martin Arnold of LogoTrikes in Spearwood (See our links page for these and other URL's) Martins work is superbly finished and his attention to detail is quite awesome. It is a pity we were looking for different specifications than what Martin was willing to supply. We will be offering Full specifications of our “Custom Built” Catrike's once our bikes are finished.
BIKE UPDATE 2nd OCTOBER 2006

After a very short time testing our new bikes, it became obvious to Lee and I that derailleur gears were not for us.. Constant “tuning” and a myriad of problems saw us re-evaluate our options. We decided on ROHLOFF hubs and a SCHLUMPF “High Speed Drive” thereby eliminating derailer's altogether. Some may say we have introduced another set of problems... I can tell you Lee and I have done more kilometres on the “Hubs” than we were able to do with the “standard” gears and they are an absolute joy to ride. We modified other things and some modifications can be seen here

BIKE ACCESSORIES:
We will be towing a trailer with all our gear. We are fitting rear racks but these will have minimal gear attached. After much research we have decided on NOT loading the bike with gear in favour of towing it behind us... Only time will tell if this is a good decision. The Rear Racks will have surplus capacity for water in the driest areas. Water at 1kg per litre, The racks will be called on to carry their fair share a few times on our journey.

UPDATE 20th SEPTEMBER 2006
We purchased the “recommended” Cyclone by Radical Design The Netherlands. The INITIAL COST for our two trailers was $1640.00. They came with “kevlar” wheels. This is despite the site showing bicycle wheels on the MAIN page. See for yourself here  These wheels "Hubert Van Ham said" where designed for wheelchairs and have a rated max speed of 6kmh ON WHEELCHAIRS. I asked what speed on the trailer and was told they would be “fine”.. I was NOT happy and felt cheated. I rang Hubert Van Ham in Holland and he agreed to “exchange” them as long as I did not incur HIM any expense. It cost $140.00 to send the 4 wheels to him AND AUD$224.00 to have them sent back. These “trailers” now owe us $1002.00 EACH This is how they appeared on line. Again “See for yourself” here

"SOME" OTHER THINGS WE REPLACED WERE:

WARNING DEVICES - Here they are on the tips of my fingers 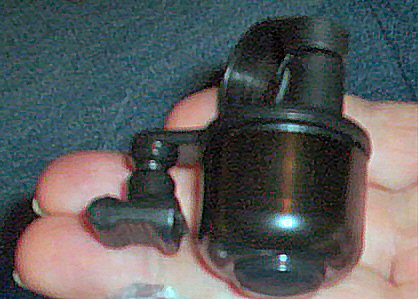 Do not deserve a comment - so pathetic they border on dangerous. Instantly replaced

THE BIDDONS  were junk (Looked like “Actionbent” give-away's) both developed holes BEFORE THEY WERE USED and had to be replaced.

LIGHTS: 3 globe LCD – both front and rear,  have been replaced with 5 globe LCD waterproof to 20 meters. Far more light and incredibly still rated to 150hrs use out of one set of batteries .

TOOLS: We have purchased separate tools to what was supplied. These include a ZEFALhp Pump, separate Alan Keys – only those specific to the bike. Miniature full function “pliers” all types. Chain breaker small spanner screwdriver plus other bit's and pieces.. I will add to this before we leave.